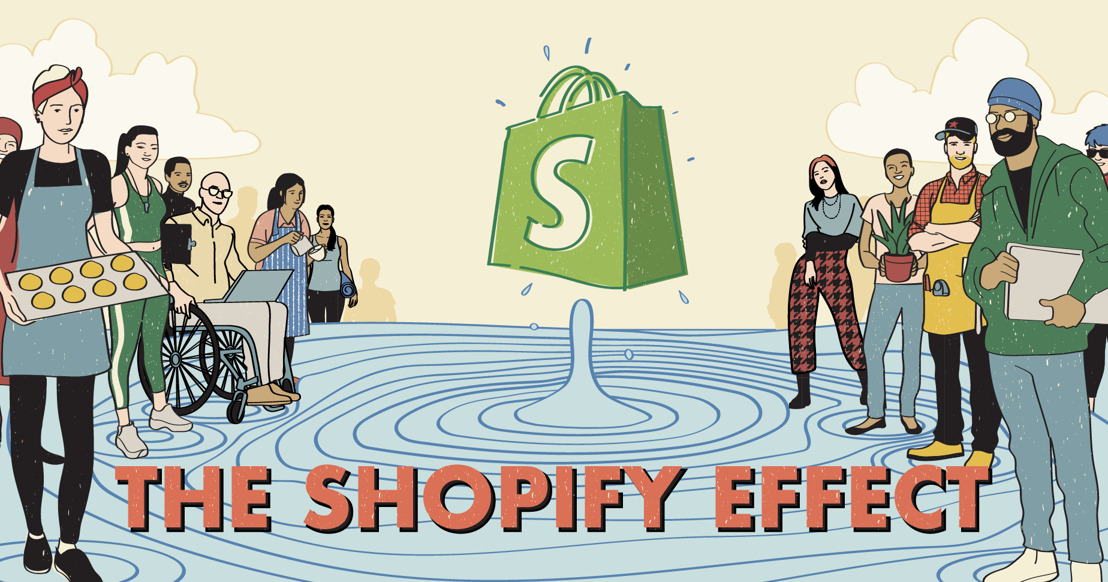 At Shopify, we think the world is better with more independent businesses in it.

Every dollar you spend with an independent business has a ripple impact on the lives of the owners behind it, their local communities, families, employees, suppliers, and the world. We’ve seen firsthand examples of our merchants pushing their industries forward, creating job opportunities in their local community, bolstering their suppliers’ business, and making our planet a better place to live.

We call this the Shopify Effect, and we set out to measure it by partnering with Deloitte, a leading global consulting firm, to get a better picture of our merchants’ and partners’ aggregate impact.

Take Nil Parra and Sophie Lauret, for example, who started Comme Avant just five years ago. The husband-and-wife duo started their new venture from their balcony, making olive oil soap—still their best selling product today—to soothe the irritated skin of their newly born son, Naël. Today, they employ 50 workers from their local community near Marseille, a city in the south of France.

In their first year, Nil and Sophie earned around $350,000 in revenue. Last year, they brought in close to $6 million. In total, businesses like theirs drove over $444 billion in economic activity, a 45% increase from 2020. Together, these independent businesses would make up the second-largest company in the world in terms of revenue—up from 7th last year—placing them above Amazon, Apple, BP, and Volkswagen.

Comme Avant’s beginnings may have been humble, but their ambitions weren’t. Today, their team hand-manufactures hundreds of other items from shampoos to moisturizers, household cleaners, and textiles. They’ve outgrown that 30 square meter balcony into a 1,600 square meter production facility.

Every product is made with earth-friendly ingredients—free of preservatives, colorants, and perfumes. Nil and Sophie thoroughly vet their 50+ suppliers for ethical standards and ensure all employees are paid fairly for their work. They've also started an independent non-profit that buys and rehabilitates land so animals and plants can thrive there again. They may be considered a small business, but their impact is anything but tiny.

Sophie and Nil with their children, Naël and Joan

In addition to their impressive online growth, Comme Avant opened four physical locations: in Marseille, Paris, Toulouse, and Pennes-Mirabeau. Sophie and Nil felt strongly about designing them to be in line with their values. Inside, you’ll find repurposed olive oil casks, wooden planks, crates, and cardboard.

Together, businesses like Comme Avant generated $38 for every $1 of revenue Shopify made last year. Empowering their success remains our focus.

Nil and Sophie describe their business as an “atypical company; a terribly imperfect, human adventure.”

They may not know it, but Nil and Sophie’s business ethos is more common than they think. At Shopify, we’ve come across countless entrepreneurial stories like theirs through powering millions of “human adventures” on our platform—and more every day. And, while each of their stories is wholly unique, the Shopify Effect numbers help us better understand their combined impact.

Here are some other key findings from our 2021 report.

* Deloitte calculates global economic impact to include profit, labor income, and tax revenues. This report looks at data from our global merchant base, as well as relevant third-party data collected by Deloitte Canada. All currency is in USD.

** Our Partner revenue calculation has been expanded to include merchant spend paid to Shopify Shipping Partners. As such, 2020’s Partner revenue has been adjusted accordingly for comparability.

*** In this study, small businesses are defined as Shopify merchants with less than $2.5 million in annual GMV.