“It’s our mission to make commerce better for everyone, and we developed this report to share global insights that can help merchants better understand the needs of their customers,” said Harley Finkelstein, Chief Operating Officer, Shopify. “At Shopify we’re inspiring the next wave of independent business owners with the tools and insights they need to succeed. We'll continue to share more of these reports as Shopify becomes the default platform to build a business and drive commerce globally. ”

In its new State of Commerce report, Shopify reveals key findings including:

For all the insights from Shopify’s State of Commerce report, download it below.

Shopify is the leading multi-channel commerce platform. Merchants use Shopify to design, set up, and manage their stores across multiple sales channels, including mobile, web, social media, marketplaces, brick-and-mortar locations, and pop-up shops. The platform also provides merchants with a powerful back-office and a single view of their business, from payments to shipping. The Shopify platform was engineered for reliability and scale, making enterprise-level technology available to businesses of all sizes. Headquartered in Ottawa, Canada, Shopify currently powers over 800,000 businesses in approximately 175 countries and is trusted by brands such as Unilever, Kylie Cosmetics, Allbirds, MVMT, and many more.

*This report is based on a subsection of global sales data on Shopify from April 2018 to April 2019; An online global survey of 3,832 Shopify merchants in March 2019; and quantitative and qualitative research on consumers in Canada and the United States in December 2018, including interviews and an online survey of 2,653 consumers. 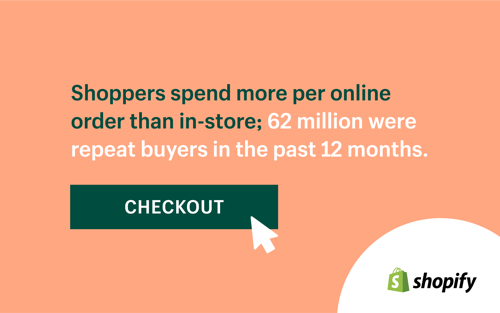